Step Two of the First Steps in Piano course is free on this website. However, you can also purchase the all six lessons in Step Two in PDF format together with all MP3 audio tracks should you want to practise it offline. Click here for more information or click the button below to buy it now.

Having practised playing on the groups of two black keys and three black keys, you can now put them together and play some music using both groups, in other words, all of the black keys. The music in this lesson is for two Violins, Drum Set, Electric Bass Guitar, and Piano. The two patterns you play in this lesson will be longer than any of the patterns you have had to play previously, and since they are longer they won’t repeat so many times. In some ways this can be more challenging since there are more notes to learn and remember, but it can make it easier to keep your place in the music, since there is less need to keep track of how many times you have repeated a certain pattern. In any case, the process for learning your part will be the same: practise, practise, then practise some more. 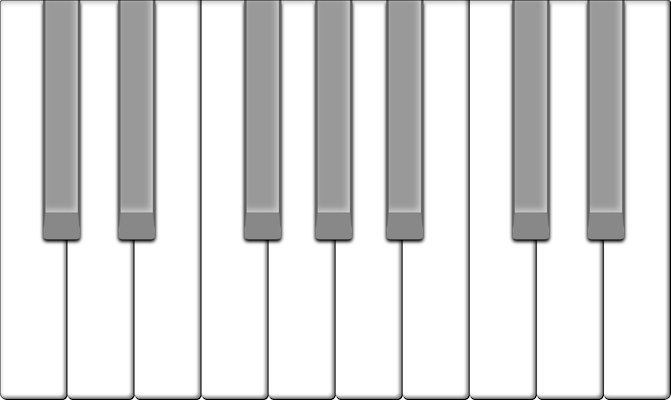 Step 1. Listen to the lesson music. While at this point you won’t have heard your part played on its own, listen closely and try to guess what part you will play (Hint: It doesn’t start at the beginning of the piece).

Step 2. Now listen to the patterns. Count along as you do and notice when the pattern changes. Remember the percussion accompaniment provides some information about the patterns. Use it to help you understand what is happening.

Step 3. Play the patterns along with the percussion accompaniment now. Finding the beginning note will be the most important step here. Once you have the beginning note, finding the other notes will be much easier. Remember, this lesson is about the black keys so you can ignore the white keys entirely.

Step 4. The next step is to listen the the patterns accompanied by the drum set. The accompaniment played by the drum set won’t be as simple as the percussion in steps 3 & 3. This may make it more difficult to play in time but as long as you can feel the beat you should be okay. Try counting along as you listen, then listen again and count while tapping the piano rhythm with your finger.

Step 5. Now play the pattern along with the drum set accompaniment.

Step 6. Next, listen to the pattern accompanied by both the drum set and another piano. The addition of the piano here adds yet more difficulty. The piano plays in a rather syncopated rhythm which is easy to get confused by, particularly for beginners. Repeat what you did in step 4 while listening to this track. Do this a few times before moving on to the next step.

Step 7. If you are ready, play along with the piano and drum set accompaniment.

Step 8. Now listen to the lesson music played without the violins. Notice when your part begins.

Step 9. Then play along to this version of the lesson music. It is important that you feel comfortable and that you know what you are doing when playing. During these lessons, if there is any one step that you wouldn’t feel comfortable playing in front of someone else then it’s a good indication that you need to practise it more. If, on the other hand, a step in one of the lessons feels too easy, you may confidently move on to the next step.

Step 10. Finally, play along with the full version of the lesson music.